All MUNI Metro Lines: Increased service on Saturdays to every 10 minutes, and every 12 minutes on Sundays

1 California: Service increased from every 7 minutes to 6 minutes

2 Clement/3 Jackson: Service increased on Sutter Street to every 5 minutes

6 Haight-Parnassus: Late-night service increased from every 30 minutes to every 20 minutes

7 Haight-Noriega: Late-night service increased from every 30 minutes to every 20 minutes

10 Townsend: All-day service increased from every 20 minutes to every 15 minutes

12 Folsom: All-day service increased from every 20 minutes to every 15 minutes

28 19th Avenue: Mid-day service increased from every 12 minutes to every 10 minutes

31 Balboa: PM commute service increased from every 12 minutes to every 10 minutes

35 Eureka: AM commute service increased from every 30 minutes to every 25 minutes, and every 15 minutes during PM commute

37 Corbett: Commute service increased from every 20 minutes to every 15 minutes

47 Van Ness: Commute service increased from every 10 minutes to every 7.5 minutes

25 Treasure Island: All-nighter frequency increased from every 45 minutes to every 30 minutes

57 Parkmerced: Weekday service to begin at 5 AM

E Embarcadero: Added weekday service runs between 10 AM and 7 PM

In addition to these dozens of service improvements, there will be two brand-new Owl routes launching on April 23, the 44 Owl and the 48 Owl.

It's taken long enough, but MUNI has finally truly upgraded its system. One year ago, Rapid service replaced Limited service, the new MUNI map was rolled out, and the first new 60-foot articulated buses were introduced.

Since then, MUNI has progressively bettered its system across the City, with more and more passengers closer to MUNI service. Only in the future will we know what improvements are to come.

MUNI has proposed a 25-cent raise in cash fares, another example of Clipper's increasing dominance in the growing Bay Area.

The surcharge is part of the new SFMTA budget plan adopted last Tuesday. The hope is that boarding times and costs will be slashed by using Clipper and MUNI Mobile, rather than cash.

If approved, the surcharge would come into effect January 1st. The extra 25 cents could raise $3.8 million dollars by the end of 2017. In addition to the fare raise, an extra $5 would be added to MUNI's monthly “A” Fast Passes, bringing the total to $88.

However, despite all the positive outcomes of raising cash fare payments, the public, and ourselves, are not convinced this surcharge is the right thing to do.

This method of money-making is unfair to the millions of people who use cash to pay their fare on MUNI. No one should have to pay more for not owning a Clipper card.

"It should be the same," exclaimed Thu Kyi, 18, a student at San Francisco City College. Antoinette Nwaokoro, a 53-year-old medical assistant, said "They shouldn’t have to pay extra. Everyone should pay the same.”

We hope the MUNI Board recognizes this biased and unjust surcharge as a step back for the MUNI system, but chances are they won't.

The SFMTA has a history of raising fares, and with Clipper becoming ever more dominant in the transit market, it's easy to promote Clipper by charging non-users more to help the system.

San Francisco, with the help of the SFMTA Bike Parking Program, has turned what used to be car parking into a gorgeous bike corral area. 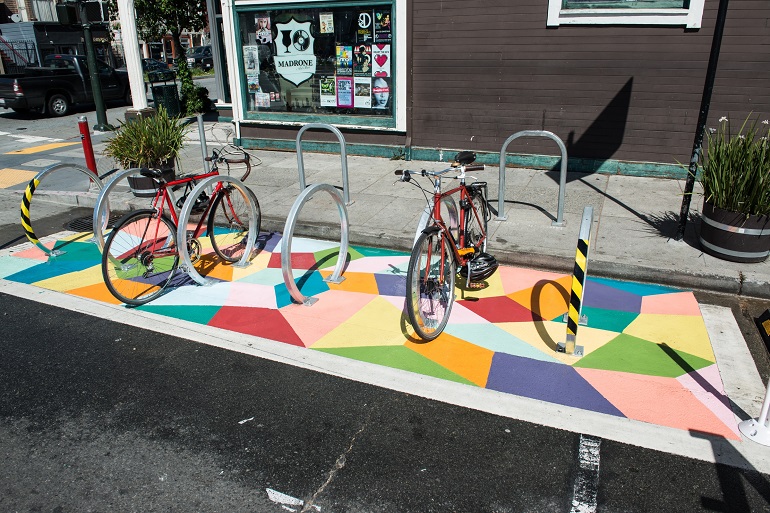 When the SFMTA Bike Parking Program was just toying with the idea of converting a parking spot to a mural in asphalt Michael Krouse, owner of Madrone Art Bar, took the unique opportunity to spruce up the outside of his business.

The bike parking area sits at Fell & Divisadero, and is one of the many examples of San Francisco's progress as an increasingly bike-friendly city.

“We are proud to launch this unique initiative with the SFMTA,” said Krouse. “Having the city’s first on-street mural outside our art bar in a bike corral isn’t just fitting, it highlights the nexus between local business, art and transportation.”

Last year alone, the SFMTA installed over 800 new bike racks around the city, bringing the total number to around 5,000. These racks park over 10,000 bikes a year in 3,000 different locations.

Super Bowl 50: Everything You Need to Make it Out Alive in San Francisco

Unless you've been living under a rock, you've probably heard the 50th Super Bowl is coming to the Bay Area. The Super Bowl, for MUNI at least, will be a dreaded nightmare, with hundreds of thousands of people in Soma and the Financial District of San Francisco days before the Super Bowl.

There are a few things you can do to survive San Francisco (in terms of public transit) while Super Bowl festivities are held Downtown. First, you can download this helpful guide from the SFMTA: https://www.sfmta.com/sites/default/files/pdfs/2016/SB50-General-Ltr_1.21.16.pdf

You can also look at this slightly confusing map showcasing Super Bowl territory and bus detours while the celebrations take place. There are helpful descriptions of each route detour below the map as well (note the 23 & 38R reroutes have been updated below): 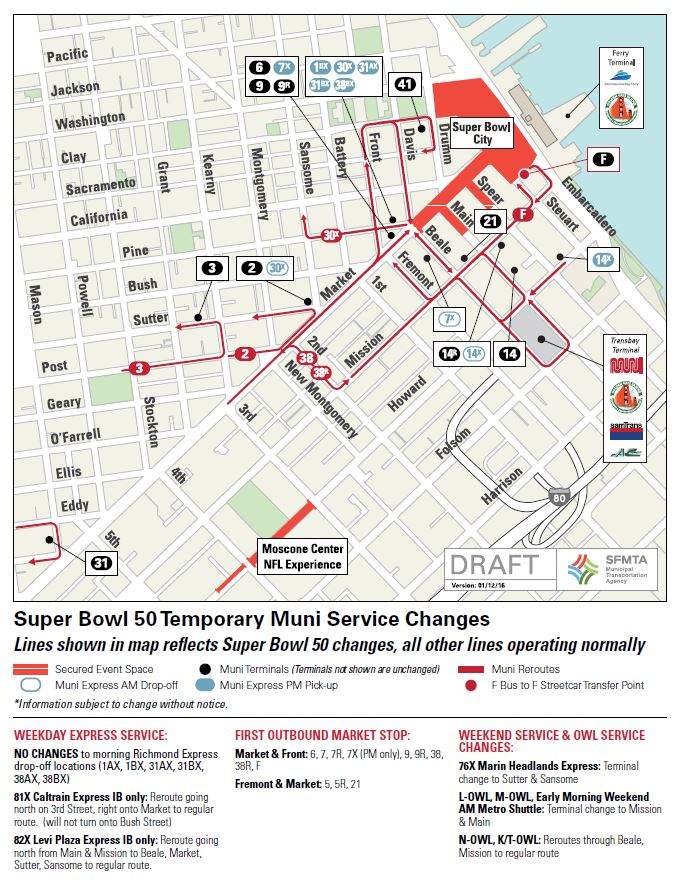 All MUNI lines, albeit the E Embarcadero, will be in service when the Super Bowl hits the City between January 23rd and February 12th. Here is a list of bus & streetcar reroutes:

So that, in a nutshell, is what Super Bowl will do to MUNI. Prepare wisely, and remember any reroutes could change at a moment's notice. We will try to keep up to date with the most current MUNI reroutes in the next several days.
For more details, visit https://www.sfmta.com/about-sfmta/blog/super-bowl-50-temporary-muni-changes-fidi-soma.

Bus shuttles will operate in place of the N Judah from 5 AM on Saturday to the end of Sunday service. Shuttles will run from Ocean Beach to Church & Duboce.

The first outbound N Judah stops west of the Sunset Tunnel is at Carl and Cole streets.

During subway communication upgrades in MUNI tunnels, the entire subway system will shut down at 9:30 PM. To reach CalTrain and further southbound destinations, ride a MUNI bus along Market Street and transfer to the T Third Street at Embarcadero Station.

MUNI Mobile is out now! There's never been an easier or quicker way to pay for MUNI buses, streetcars, cable cars and metro lines.

MUNI Mobile lets you buy tickets to be put on your phone instantly with a credit/debit card, or with a PayPal account. You can also buy passes for use on your phone multiple times. You can activate tickets or passes anytime you're ready to ride.

You can pay for single-ride fares, as well as one-day, three-day and seven-day passports. You can even use MUNI Mobile to pay for Cable Cars!

MUNI Mobile comes with a trip planner as well, so you'll know exactly when your bus/train/streetcar will arrive. And coming 2016, there will be voice command integrated into MUNI Mobile.

Embarcadero Station Will Close at 9:30 PM (MUNI Only) for the Next Week

As part of The Blue Light Emergency Telephone and Radio Replacement Projects, Embarcadero MUNI Station will be closed at 9:30 PM from November 6th to the 14th. This is to leverage the construction of the Central Subway occurring during the same time period.

Also during this time, the T Third Street will be replaced by bus shuttles. If you need to reach further southbound destinations, board a T Third bus shuttle on Market and Spear Streets.

From November 6th to the 14th, SFMTA crews will be constructing a portion of the Central Subway at 4th & King Streets, located at AT&T Park and CalTrain.

During the construction, MUNI's whole entire rail storage facility will be closed off, which will affect all MUNI service throughout the City.

For starters, both streetcar lines will be impacted. The E Embarcadero, which runs only on weekends for now, will not run during the two weekend time periods between November 6th and 14th. And the F Market will begin service 45 minutes later than usual.

Many Metro lines will be affected as well. The T Third will be replaced entirely by buses (see map below). Stops will be on the curbside, rather than the center of the street.

Along with likely delays, the N Judah will stop at a temporary platform on King Street between 3rd & 4th Streets. And the K Ingleside will only run from Balboa Park to Embarcadero, and will not switch to the T. Riders continuing southbound will need to transfer to the N or the T Bus Shuttle.

Buses will, of course, be affected as well. The 81X and 82X will stop on the south side of Townsend between Lusk and 3rd Street.

After 9:30 PM every night, subway service will halt in the tunnels and service will be replaced with bus shuttles. This is part of the Sunset Tunnel Trackway Improvement Project. To learn more information, click on https://www.sfmta.com/projects-planning/projects/sunset-tunnel-trackway-improvement-project.

Starting Saturday morning at 5 AM, bus shuttles will replace the N Judah between Ocean Beach and Church & Duboce as part of the Sunset Tunnel Trackway Improvement Project. This will last until the end of service on Monday.

A new method of paying your fare on MUNI is coming this fall - say hello to MUNI Mobile! This new app will allow you to pay your fare on MUNI with your smartphone - and you could be one of the first to test it out.

If you want to participate in testing MUNI's new app, complete this survey by October 6th. If you're selected, MUNI will contact you to let you know.

In order to test MUNI Mobile, you need an Android phone or iPhone with a qualifying operating system. You also need access to your credit/debit card or Paypal.

MUNI Mobile is one of the many service improvements coming soon by MUNI Forward. MUNI Mobile is expected to be launched by the end of this year.

For more information, go to https://www.sfmta.com/about-sfmta/blog/calling-all-riders-apply-now-test-drive-muni%E2%80%99s-new-mobile-ticketing-app.

MUNI Heritage Weekend is fast-approaching on September 26th and 27th, and while you're there, you can win a little piece of history. Here's how to participate in the MUNI Heritage photo contest:

1. Take a picture you think captures the essence of MUNI Heritage in San Francisco.

3. Five lucky winners will receive a rare special limited edition poster with a reprint from the SFMTA Photo Archive. Your name will also be mentioned on the SFMTA Blog!

If you tag the SFMTA, your photo may be re-shared. MUNI Heritage Weekend starts this Saturday, from 10 AM to 5 PM. Get creative, and show MUNI's Heritage!

For more info, go to https://www.sfmta.com/about-sfmta/blog/want-win-piece-history-snap-share-muniheritage-week.